So, I’m in jail… again. Dad’s got me locked up in my area and isn’t letting me out (except for short and closely supervised time in the morning and evening).

I’m innocent, though! I was framed! It was, uh, some other bunny who peed on the carpet, not me!

What’s that? Mumm said she saw me do it? Right in front of her own eyes? Um… maybe she was hallucinating?

As you can imagine, being locked up like this is very exhausting. I hope I can get out soon! 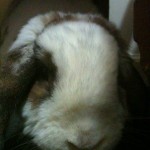 Thank you everyone for wishing me well. I am (mostly) feeling better now, although I am still furious about the way I’ve been treated. Fortunately, I have already started on my plan for revenge.

For starters, I have taken some big chomps out of some of mum’s favorite (and most expensive) shoes. That’ll teach her to participate in bunny torture (a.k.a., critical care syringe feeding)!!

My revenge on dad will be a little bit more difficult – he is very careful about keeping his things out of our reach. I don’t want to spoil the surprise, but here are some things I might do:

Those are just some ideas, and I’m still thinking of the best way to enact my revenge on dad. One thing you can be sure of though – it’ll come when he least expects it!

I will have my revenge!!

Mum and dad decided that since today was such a nice day, they’d dare to pick us up and take us outside and give us a brush-down. They even thought they’d be “nice” and take us out on the grass (in the shade, under a tree, right next to the house where it’s safe).

Gus went first, and like always he played the part of the “good bun.” Ugh. Just look at him, acting like it’s not so bad. But I know better… I saw his legs shaking when he came back in. He tries to play it like he’s a rough, tough bunny that’s not scared of anything, but I know he was scared and didn’t like it either!

Next was my turn, and I didn’t want to go. I thumped and ran around when dad came to pick me up, but he and mom were playing together and managed to corner me quickly.

Then they took me outside, and not only did the brush me, but they trimmed my matted fur on my underside. How dare they! All around it was a horribly degrading experience.

But… I got the last laugh this time. In contrast to Gus playing the “good bun,” I always play the part of the “bad bun.” So, dad was trying to calm me down so he could keep brushing me, and I was sitting in his lap. I did not want to be out here anymore.

So I peed on him.

Dad quickly moved away from me and said (in a sort of surprised and confused voice) something about a warm feeling against his leg, and he very soon realized what I had done. I was then quickly brought back inside and left alone for the rest of the day. Mission accomplished.

So the other day, mum wanted a cuddle with us. So she made dad pick us up and then she snuggled us. (One at a time, of course – we are too much bun for any one person to handle all at once!)

Gus is no good with the snuggling – if you pat his nose just right, he starts to go all dreamy and relaxed.

Gus, THAT WILL NOT DO.

When I get snuggled I try to bury my head in mummy’s neck. Using my claws also helps too; I always try to keep them nice & sharp so nobody even thinks of picking me up! I also make sure that I shed as much as I can, to really aggravate mummy’s allergies and asthma. That way, she’ll put me down quicker.

But this time, nothing worked – dad grabbed me (after a short chase around the house) and mum snuggled me for a good long time, all the while petting my nose and stroking my ears. While this may be fine for her, I DON’T LIKE IT.

So, in retaliation, the next day I got up on the couch and chewed a hole in one of the pillows.

But I cleverly did it while mum & dad were out, so they couldn’t punish me for it! I win!

That should teach them not to pick me up!

I miss you.Mum doesn’t give me as many treats as you. That makes me sad. And mad. So I have been acting really bad. But then Dad locks us up as punishment. I hate it here. Can I come  live with you?

Love Betsy
P.S I wouldn’t want Gus to come. Just so you know.

(Auntie Leisa is the one who took care of us while mum & dad were away.)

Dad has grounded us – or put us in “lockdown” as he calls it – for misbehaving.

I don’t know what he’s talking about. We didn’t do anything bad.

…Except for rip up the carpet a bit.

…And get on the couch and scratch it.

…And get under the side table and scratch that.

…And worm our way behind the couch where we’re not allowed (and haven’t been for years).

…And chomp on the power cord to a lamp.

…And continue chomping on the power cord to a lamp, after being told off by mummy, while she is still standing there watching me.

But other than that, we’ve been perfect little angel bunnies!

Betsy got into some BIG trouble this weekend.

While mum and dad were out doing the grocery shopping (for us, of course) she got up on the couch (again).

But that’s not the worst of it… she got up there and she CHEWED a BIG HOLE in the couch cushion. (Well, kind of big… anyway, big enough to be noticed.)

Mum and dad were SO mad when they got back and found out.

Dad was especially disappointed. So as punishment he picked Betsy up (she hates that) and… well, these pictures kind of tell the rest of the story. Dad said that this is what happens to bad bunnies. Dad apparently has a dark side when it comes to major bunny damage. Betsy was not enjoying this. But I think that was the point. I could hear her say “get me out of here!”

I tried to tell Betsy it was her own fault, but she wouldn’t listen to me.

After that, dad kept us in lockdown for 3 days. (I was given extra treats to make up for having to be locked up too – one litterbox and all that.)

I can only hope Betsy learned her lesson and will stay away from the couch, and stick with things left on the floor – those kinds of things mum and dad can’t get mad at us for chewing (after all, they are the ones who leave them on the floor, right?)

The other day dad was getting mad at me for thumping.

I was sitting in his office and I was thumping away, even though he kept telling me to stop and he said “why are you thumping Betsy, there’s nothing wrong.”

But I kept thumping.

My thumps in dad’s office sound really loud because of the floor there. It’s great.

Dad didn’t like this, and it bothered him enough to pick me up (oh the disgrace) and… put me on his chair??? Oh well. I eventually started digging furiously in that blanket and biting it to show my disapproval and then finally dad helped me down (the edge of that chair is squishy and scary!).

I then quickly ran out into my box in the living room and hid. I’d thump at dad again but I don’t want to end up in that chair again!!

…dad is letting us write this as part of our punishment. He locked us in the “bad bunny box” (i.e., the bathroom) for an hour. He was not happy.

We… may have also scratched up his arm a bit.

We will probably not be writing for a few days – dad says we are “grounded” until we learn our lesson. Gus is not happy either; he keeps saying he was innocent and that he was “unfairly” punished. But we’re not saying any more than that right now.

Anyway, it’s back to “lockdown” for me.

After breakfast this morning we… got on the couch again. But dad heard us “plop” on the cusions and came out – he was REALLY mad. He squirted us with water, clapped his hands, said “no!” and then locked us up in our area AGAIN.

He said this is a new record for us – just two hours after being let out, we’re in trouble again. He said “next time you’re both going to end up in the ‘bad bunny box’!”