Dad told me this morning that he found out that there is a game now where you take care of a rabbit – and that is the game! He said it’s called “Petz Bunnyz,” for something he called “Nintendo DS.” Oh, I see, it’s sort of a game thing that you can hold in your hands (boy, must be nice to have opposable thumbs…)

I’m not sure how I feel about this. At first, I thought it was good – people can play with bunnies in a game instead of buying them from pet stores and leaving them alone all day to be sad. But, then I thought about it some more, and what if playing this game, they want to get a real rabbit? It might encourage more people to get rabbits who maybe shouldn’t.

Still, I suppose it depends on how realistic the game is. Dad said it doesn’t look nearly as good as a real rabbit, and after all, rabbits are complex animals, I’m sure no game could ever capture our true “spirit.” So maybe this will convince people not to get rabbits if they are not ready for the commitment. That would be best, I think. 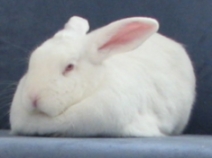